Public education manages to teach almost everyone about volcanoes and eruptions of lava, but in actuality, lava serves a great practical purpose in this modern life. Of course, it doesn’t start out as lava. The intense heat from the earth’s ancient core is constantly radiating outward and into the surrounding layer of rock known as the mantle. If the mantle becomes hot enough, it melts and becomes magma. Because the magma is less dense, it gradually rises up and through the earth’s crust. If it rises all the way to the surface, only then can it be called lava. If not, it simply heats the surrounding water and rock creating what is known as a geothermal reservoir. 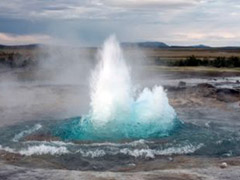 This geothermal water can be harnessed for plants that use the steam to power turbines and create electricity. There are several kinds of these geothermal power plants (dry, flash and binary) and all of them are clean and efficient alternative energy sources. This is all in addition to the traditional benefits of geothermal reservoirs, hot springs and geysers such as medicine, cooking, domestic heating and good old-fashioned rest and relaxation. So, add geothermal energy to the list of other alternative and renewable energy sources including solar power, wind energy, nuclear power and biofuel. And, keep in mind that the top three advantages to geothermal energy are as follows:

1) It’s always there. The fuel source is located directly under the site. Plus, Geothermal power plants run 24 hours a day and seven days a week regardless of the weather conditions or sociopolitical climate.

2) As mentioned before, Geothermal power plants are cleaner than using fossil fuels. Nothing needs to be burned, and therefore, there are no harmful emissions. The plants can easily coexist with indigenous life forms.

3) Unlike oil and related fossil fuels, no speculator can interfere with the prices of geothermal water. The almost inexhaustible resource allows us to provide electricity and save the money that would be spent on importing fuel in this fragile economic era. Geothermal power plants can also help undeveloped countries grow through the continually amazing utility of electricity.