Remember that scene with the plastic bag whirling around in American Beauty to imply some benevolent force had a hand in humanity’s destiny? Well, prepare for the sentiment expressed in that unforgettable scene to be completely ruined. 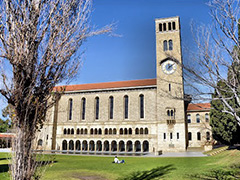 According to a study recently completed by University of Western Australia, 99 percent of the plastic waste that humans have cast into the oceans cannot be found. The research team split up into five sea-faring vessels and sailed around the globe to track down our plastic trail of refuse and only came back with a calculation of 40,000 tons. Sure, that’s no small number, but the expectations were to find millions of tons.


So what are we missing? Where is all that plastic garbage going? What happens is that when a piece of plastic whether it’s a bag or a soda can ring or child’s toy is discarded into the water, the sun gradually breaks it down. After a while, it begins to look like normal fish food undulating around in the currents.

Thus, the Australian research team fears that a large chunk of our plastic waste is being consumed by marine life and reentering the food chain as toxic bits of mercury and DDT. The scientists are hoping that fish are expelling more of the plastic than they think in one way or another before being caught and consumed by fishermen or larger fish, but more research is needed to test that hopeful theory.

According to a recent article by Kevin Matthews and Care2 on the Environmental News Network, “The researchers concede that the plastic could be disappearing for multiple reasons, including being weighed down and sinking to the bottom or slowly breaking into undetectable pieces. Still, they assert that it is ‘indisputable’ that at least a large portion of the plastic is being consumed by marine life.”

That’s a pretty good reason to at least be conscientious about your own littering habits. The alternative is to truly get a taste of your own medicine down the road.