The Not-So-Great State of the Great Lakes

Thanks to a recent study of Michigan’s Great Lakes by the International Joint Commission, we now know what an uphill battle we have in future water treatment standards. Put simply, our waterways are riddled with the entire spectrum of modern society’s everyday chemicals despite standard efforts to remove them at sewage treatment plants—everything from herbicides and anti-bacterials to hormones and anti-seizure medications. Although these contaminants only appear at varying trace levels (parts per billion and parts per trillion in some cases), we are still uncertain about their risks and effects as we literally swim in our own cocktail of chemical run-off. 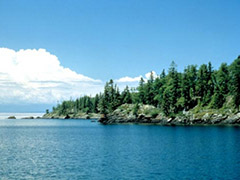 “(Wastewater treatment plants) weren’t designed to handle these types of chemicals,” said Michael Murray, a scientist with the National Wildlife Federation’s Great Lakes Regional Center who is also on the International Joint Commission’s board.

“Aquatic life and humans aren’t exposed to just one at a time, but a whole mix,” said AntonetteArvai, physical scientist at the International Joint Commission and the lead author of the study. “We need to find which of these chemicals might hurt us.”

Arvai, and her team, reviewed a decade of data from wastewater treatment plants around the globeand considered how well a list of 42 compounds were removed. The plants had a low removal rate for more than 25 percent of those chemicals. Six chemicals, in particular, were detected often and had a low rate of removal in treated effluent: an herbicide, an anti-seizure drug, two antibiotic drugs, an antibacterial drug and an anti-inflammatory drug.

According to an article originally published in Environmental Health News and edited for TheDailyGreen.com, “Caffeine, acetaminophen and estriol (a natural estrogen) also were frequently detected in sewage but, like about half of the substances examined, had high removal rates. Plants removed one antibacterial agent of concern, triclosan—added to many personal care products like soap and toothpaste—at a "medium removal efficiency. Whether and how humans are exposed is also a question. Chemicals’ showing up in wastewater effluent doesn’t necessarily mean they will be found in drinking water. But some studies have found prescription drugs in drinking water at parts-per-trillion levels. A federal study of 74 waterways used for drinking water in 25 states found 53 had traces of one or more pharmaceuticals.”