There are several looming environmental factors leading to a global food shortage. As the population of honeybees and other pollinators dwindles, the human population approaches 9 billion, and we’re already feeling the effects of global climate change. The results will be that fruits and vegetable prices soar, and subsequently, the price of livestock and wind pollinated crops also goes up just to meet hunger demand. Consequently, large masses of people will turn to the oceans for a viable protein source. 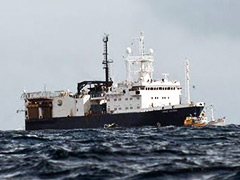 Consider this exchange between Kat Friedrich of EnvironmentalNewsNetwork.com and Andrew Sharpless, CEO of Oceana and coauthor of The Perfect Protein: The Fish Lover's Guide to Saving the Oceans and Feeding the World.

"We all don't want to have to choose between biodiversity and feeding people," said Sharpless, “Restoring ocean fisheries in 24 countries could provide a meal for close to a billion people a day. New Englanders can also help ocean ecosystems recover by eating wild fish, choosing small fish, buying fish from the United States and eating mollusks.”
“It's best to avoid eating shrimp,” Sharpless went on to say, “because they are caught in nets that bring many species up accidentally. The unwanted species are known as ‘by catch’ and are tossed back into sea, usually dead.”

So, there are several guidelines to keep fishing sustainable in the future. For instance, carnivorous fish like salmon should be caught in the wild rather than farmed. And, maybe we could cut down on shrimp consumption a little bit. However, since farming oysters, clams and mussels reduces pollution and builds local job opportunities, Sharpless recommended eating mollusks.

"They're cleaning the ocean as they grow," he said. "We love the mollusk farmers."

Luckily for us, clams, mussels and oysters are extremely versatile and can be prepared in a thousand different and delicious ways.