Lead researcher Toshihiro Omori, and his team at Tohoko University in Japan, recently unveiled an exciting advancement in super-elastic alloys—a material which can reshape to its original form “at any temperature from -196 to 240 degrees Celsius.” Mr. Omori commented that “this new material was far more elastic than other superelastic alloys,” and that “the raw material is cheap ... resulting in the potential for large scale applications,” but also that it is too expensive to manufacture on a wide scale at this point. 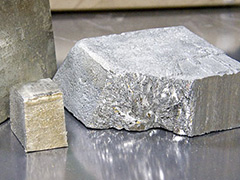 People are calling this “material with memory,” and while it might be fun toimagine visions of the T-1000 villain from Terminator 2: Judgment Day being frozen, shattered, and then under the intense heat of the foundry, reformed as the pieces melt and slide back into shape, it might be going too far.

While it is an intriguing beginning for what might become a more ubiquitous technology, found in every electronic device, to the car you drive, initial applications of this technology might be more immediately seen in aerospace design and construction of more earthquake resistant buildings.
However, according to Richard D. James of McNight University, the material could “convert heat to electricity directly.” It could possibly pave the way for energy efficient electronic devices and recycle lost heat to recharge batteries and generate power.

All tiers of the government who fund and coordinate infrastructure projects should pay attention to ongoing developments in the manufacturing of this material. Our electric grid could surely benefit from this technology, if one could assume its implementation could make our grids more efficient. Where this material could be installed can be catalogued into a database making these spots searchable. These “hot-spots,” so to speak, could also source charging stations for electronic devices, or vehicles, without putting further strain on our grid. Furthermore, the U.S. federal government should begin to bring municipalities into the fold when it comes to investing in this cost-saving technology now, so that the U.S. can reinvigorate the dialogue about reinvesting in our nation’s slipping infrastructure.