Stewart Brand: One of the Great Environmentalists

Steward Brand, a cultural iconoclast of the highest order, continues to challenge preconceived notions of environmentalism even today, despite having been around since the earliest days of the movement. A futurist, an environmentalist, and a cultural renaissance man, Brand was a close friend of Ken Kesey and an active participant of the 1960’s counterculture movement. He founded numerous institutions such as The WELL, one of the longest-standing virtual communities in existence, and The Long Now Foundation, a not-for-profit organization that encourages long-term responsibility through various scientific and environmentalist projects. 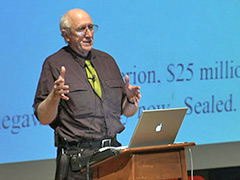 One of Brand’s earliest claims to fame came in 1966, when he made his first foray into activism by creating and selling pin-back buttons that read “Why Haven’t We Seen a Photograph of the Whole Earth Yet?” The buttons were meant as a call to NASA  who supposedly harbored a full-color picture of planet Earth at the time  to make the image public. Two years later, NASA released the image, which is often credited as a major influence in the formation of the environmentalist movement.

But this was just the beginning of Brand’s influence in American culture. In 1968, he founded and published the Whole Earth Catalog, a collection of reviews and information on tools such as maps, garden tools, forestry gear, welding equipment, and a host of other items that anyone might need to start a life of self-sufficiency. The periodical, which ran until 1972, was instrumental in fostering both a do-it-yourself mentality in the counterculture, as well as the back-to-the-land movement popular at the time.

In recent years, Brand has remained relevant by casting off the romanticism of the early environmental movement to adopt an “ecopragmatist” viewpoint. Brand’s latest book, Whole Earth Discipline, opposes standard environmentalist precepts that reject such things as nuclear power or geoengineering. Instead, Brand argues that such practices, which have always been portrayed by activists as detrimental to the environment, can actually be harnessed to the benefit of humanity, in ways that offset uncontrollable risks like carbon dioxide contamination from coal waste. In support of GMOs, Brand cites benefits like the creation of “crops designed to grow on less land with less pesticide; new microbes that protect ecosystems against invasive species, produce new fuels and maybe sequester carbon.” (Tierney)

Unlike many environmentalists, Brand has often been one of technology’s biggest champions. Given his history, it comes as no surprise that Brand happens to be one of the catalysts behind “de-extinction,” a project which recently made headlines by taking its first steps toward bringing the extinct passenger pigeon back to life. Using new techniques in genomic engineering, Brand and his colleagues hope to revive the passenger pigeon and a variety of other extinct species that were severely affected by human interference in their ecosystems.

A chronology of Steward Brand’s major biographical events can be found here: http://sb.longnow.org/SB_homepage/Bio.html