Solar panels coming to your next transatlantic flight?

A significant technological leap is being made in the solar panels industry. For the first time ever, an experimental aircraft that generates its own power through solar energy panels is making a round-the-clock test flight. 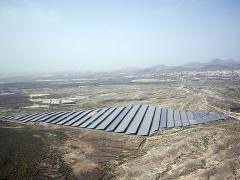 The plane has 12,000 solar panels, and this is the latest move of the Solar Impulse project, which is lead by Mr.Borschberg and his business partner Bertrand Piccard.

The pair aims to prove that solar energy and aviation can go hand in hand in the future, and can also generate power for society at large.
The main goal of the experiment is to find out whether the plane can fly in darkness, using solar energy panels that completely cover its wings, and which generate enough power to keep the plane in the air for 24 hours.

The HB-SIA plane weighs the same of a family car but its wingspan is that of a big airliner.

"For seven years now, the whole team has been passionately working to achieve this first decisive step of the project," said Andre Borschberg, the plan's pilot.

The pilot will fly the plane to an altitude of 27,900ft on the night of July 7th 2010, when the sun's rays cease being strong enough to supply the solar panels with sufficient energy.

The prototype plane will then start a gradual descent using energy that is stored in its batteries until sunrise.
The team said that the big question that they want to answer is whether the pilot can make use of the battery energy efficiently enough to fly throughout the entire night.

"If this mission ends up being a success, not only will it be the longest but also the highest flight ever made by a solar plane."
The plane is highly advanced. It incorporates composite materials to keep it super light, and uses super-efficient solar panels, batteries and motors to keep itself in the sky for longer than any other solar paneled plane has achieved.

The plane was unveiled last year and since then it has been undergoing daytime trials. The first full daytime flight was completed successfully on 7 April.

The group has many plans for the future. Their goal is to make the first manned transatlantic solar flight in two years time, and in 2013 they want to complete the first full circumnavigation of the Earth.

Whilst we can safely say that your next transatlantic flight will not be powered by solar energy panels, the technology is being developed step by step and it is surely only a matter of time before it reaches the level of advancement required to be considered for commercial use. Currently, Mr.Borschberg and his business partner Bertrand Piccard are pioneers in this field.

2 Responses to “Solar panels coming to your next transatlantic flight?”