Returning to the Past for Sustainable Cooling

So many of the world’s areas have always experienced high temperatures. Architects of today are beginning to examine the logic, wisdom and methods of cooling, before the advent of today’s air conditioning systems. It appears our ancestors had some rather ingenious ways to keep the temperatures down, without electricity and create their own sustainable cooling. 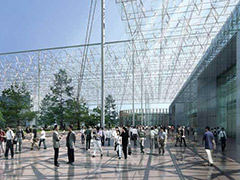 Low-tech and more simple architectural designs for interior cooling have been around for thousands of years; we just seem to forget the need, since we have air conditioning. Architects are returning to some of the most ancient methods of cooling, using water evaporation combined with building design. In Jaipur, India the art of stepwell structures is being put into place, even though it was previously used over 1,500 years ago. The method involves a pool of water at the base of the building and water evaporation using a system of descending steps. The historical stepwell systems went down many layers below ground level, but the newer design is functioning incredibly with only four layers. In essence, the water evaporation is the cooling model while the earth is being used as a heat sink.

This low-tech model is being called ‘passive cooling’ and the term is also being used for any of the design features or technologies being used for cooling buildings without the use of the consumption of power. Buildings are being raised above the ground with the use of pillars and areas are created for wind passage and shade. Walls are being constructed with heat-absorbing materials that create a ‘thermal bank’ and the heat is being released during the night when temperatures experience a drop.

Sustainable cooling returns us to a more low tech approach and allows us to demonstrate excellence in green eco building methods. In India, the new (and old) plans are being introduced for all new government buildings.

3 Responses to “Returning to the Past for Sustainable Cooling”