When you plug in your laptop at home so you can surf the Web, you most likely have fossil fuels to thank. However, this could change in the near future. Your home may one day be powered by unwanted carbon dioxide. 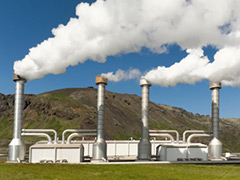 If you break down the sources of renewable energy, you’ll find what’s called geothermal energy, which made up about 3 percent of total electricity generation that year. The U.S. is actually the world’s leader in geothermal energy use, with plants mostly in California and Nevada, according to Geothermal Energy Association’s 2012 annual report.

Conventional geothermal plants create energy from the heat off water deep underground. However, researchers from University of Minnesota, Lawrence Livermore National Laboratory and Ohio State University have recently come up with a geothermal plant design that could use unwanted carbon dioxide in place of hot water to create electricity.

There are several potential benefits to this approach. For one, carbon dioxide extracts heat more efficiently, and the entire approach is twice as efficient, according to an article posted on Science Daily. Another benefit? We could start seeing more geothermal plants in states west of the Mississippi River. In addition, the researchers believe that energy created through this type of geothermal plant could be stored for days, or even months, for later use when the electricity grid needs it.

"What makes this concept transformational is that we can deliver renewable energy to customers when it is needed, rather than when the wind happens to be blowing, or when spring thaw causes the greatest runoff," said geoscientist Tom Buscheck.

The team of researchers came up with a video highlighting how geothermal energy could be a major asset to our future. Check it out here: http://www.energypathways.org/