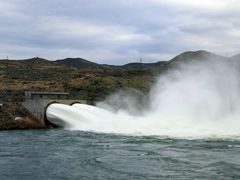 Many people are already aware that the increasing lack of availability of water around the world is a huge issue, and will continue to be one in the upcoming years. Increasingly, the United States, as well as the rest of the world, is getting to peak water limits. Of course, we are still far off from running out of water altogether, but local supplies in many countries are becoming exhausted, as they can’t keep up with the increase in populations and agricultural productivity.


Our planet consists mainly of water, as everyone knows, so it seems like a far-fetched idea that we might run out of it one day, particularly considering that the majority of what we consume is recycled naturally. The problem is though that the water we use is not equally distributed, much like money. Certain areas are suffering because of droughts, while others are being flooded, which is not beneficial to anyone. So, peak water should only be discussed on a regional basis.

There are three different types of peak water – peak ecological water, peak renewable water, and peak non-renewable water. Peak ecological water is the amount of water, which can be taken out of lakes, streams, and rivers, until the disruption and damage begins to cost us more than the actual value of the water that is withdrawn. Peak renewable water refers to water that is restored by rain or snow, so it is limited to flow. Its peak is reached when the withdrawal level meets or exceeds the replenishment level, so the words renewable and unlimited should not be used interchangeably. Water that is non-renewable is much like oil. You can find it in “fossil” aquifers, which are not replenished at decent rates, and the water is stock-limited. So, in this sense, this type of peak water is like peak oil.

In the end, it’s all about the availability of water. There are various river basins that have reached their ecological peak already, such as the Colorado that does not reach the Pacific anymore, as well as the Nile, the Yellow River, and the Jordan. There have been substantial ecological impacts in all of these areas. Non-renewable sources of water that are approaching or have already reached their peak are California’s Central Valley, the North China Plains, the Ogallala Aquifer, and a number of India’s basins, which account for about 8 percent of the water use of the country.

As a whole, California has not quite yet reached peak water, but some of its water systems are already past their peak water point, in all of the definitions described above. California has done a fine job in capturing, moving, storing, and using water. However, there are limits to what it can collect and store. It simply won’t be able to further increase the volume of surface water stored, although there is still scope to improve groundwater storage and smarter flood-control projects.