Mercury and dioxins are also released into the air by coal-fired power plants. Dioxins are poisonous. If a person consumes a large dose of dioxins he or she can die. Dioxins are found naturally in the air, but we breathe in amounts too small to negatively affect us. The levels of dioxins can accumulate within the body and can lead to different disorders. Mercury is also very harmful to human health. The most dangerous mercury is found in the vapor forms of methylmercury and metallic mercury, as these forms of mercury reach the brain easily. Vapors of mercury can also cause nausea, diarrhea, eye irritation and other negative effects. It should also be noted that young children are more vulnerable to mercury exposure than adults. 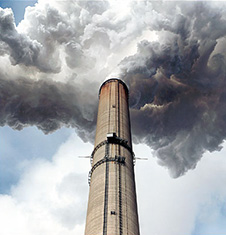 Our world is full of paradoxes and contradictions. Here is an example of such a paradox, though, if we look at it closely, we can find out that this contradiction is based on very simple and "tangible" reasons.

In 1970 and 1977, the U.S. Congress amended the Clean Air Act. This provided for the exemption of coal-burning power plants built before 1977. At that time, a logical opinion was spread throughout the public that these plants should be exempted as they were going to be upgraded or replaced with new facilities. If that had been done, the level of their pollution would have been reduced and the exemption could have been justified. Somehow, though, this did not happen. Most of these plants were not replaced with new ones. Even though there have been many studies conducted and research that has supported the harmful effect of such plants on human health and the environment, nothing has changed. These old plants are allowed to operate under the least protective standards. This means that their emissions outputs can be 2 to 13 times greater than the emissions of new plants.

Comparing electric utilities with coal and oil-fired power plants, we see that the level of pollution belched by coal power plants exceed several times the pollution caused by electric utilities. Moreover, in 1998, these plants emitted about 54 times more acid gases in comparison with chemical plants, which are actually meant and designed to produce these gases.
Why are these plants not replaced? The answer is very simple. Because the old coal power plants are cheaper to operate. Basically, they are cash cows. The problem also refers to the so-called economical threat. For coal-producing states, any upgrade or replacement of old plants is seen as an economic threat or political issue. Nevertheless, some actions have been undertaken, starting in 1997 when the U.S. Environmental Protection Agency revised ozone and health standards. It was adopted that there should be an established plan that would control the reduction of emissions by 2003. In 2002, President George W. Bush launched the Clear Skies Initiative, which led to the proposed federal law Clear Skies Act of 2003. The Clear Skies Act has its advantages as well as some flaws, as some critics have mentioned.