When it comes to wind energy and wind turbines, an Oregon wind power project is one of the most numerous in the country right now. This state stands only behind one other in the United States when it comes to available wind power for residents, and the number one leader in this area is the state of Texas. Thanks to a number of Oregon wind project completions in the past, currently seven percent of the energy used by residents of the state comes from the wind, and other renewable energy sources also play a part. This makes it a leader that many other states in this nation need to follow. Domestic renewable energy sources like wind and solar power can play an important role in energy and domestic security, as well as keeping the environment clean and protecting the earth from damage. 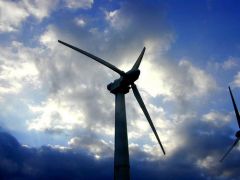 A new Oregon wind project uses wind turbines to create power from wind energy. This method provides clean power that does not have any harmful greenhouse gas emissions or pollutants. Using alternative energy sources also helps to lower the cost of the power most of the time, and the residents who live in the state will benefit from the savings and the clean air. Using an Oregon wind power project instead of a coal burning plant will eliminate the particulates and harmful smoke in the air over the state, and there are no dangerous chemicals or harmful toxins used. The state also gets a large percentage of power from hydroelectric dams. When it comes to being environmentally friendly, Oregon tops the list.