One Ontario farmer has decided to battle against wind farms in the area, and has taken this battle to court. In an original and never before seen move, farmer Ian Hanna from Ontario has filed an application for a judicial review. This is just the last step in a long line of actions brought by Hanna which includes petitions to the government over this alternative energy business. Investing in solar power is fine for this farmer, but the battle against wind farms is a whole different story. The argument for the judicial review is that there is uncertainty in the scientific community about the health effects of wind turbines on people who live close to these turbines. There are some physicians who back up the claims of this farmer, and who have been urging for a full investigation and study of the health effects that living near wind farms can have. 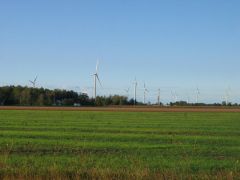 The battle against wind farms started by this farmer is based in science. There have been a number of scientists and professionals who have spoken out against erecting wind turbines close to where there are people. Dr. Robert McMurtry, who was the dean of medicine at the University of Western Ontario for a time, backs the application for judicial review. According to him, many individuals in Ontario suffer from medical problems and health effects from wind alternative energy business operations. Unlike investing in solar power, wind turbines are loud, powerful, and continuous. This has caused sleep deprivation, anxiety, severe and persistent headaches, nausea, depression, and many other medical problems. The application for the review filed states that the Green Energy Act is in violation of a precautionary principle in the Environmental Bill of Rights.