The National Research Council, or NRC, recently released a report documenting their research on oil and gas exploration throughout the Arctic, which outlines details about the impact of oil spills, as well as several areas that call for improvement. Since the council last looked at these issues over a decade ago, numerous changes have taken place, including a stark rise in the price of oil, declining ice coverage due to climate change, as well as the infamous BP oil spill and Shell’s Kulluk drilling rig accident.

Taking in the altered 21st century landscape, the committee put together a list of several gaps in preparedness for a potential oil spill in the Arctic. Interestingly, the report calls for more controlled spills in order to become familiar with how to contain oil in icy environments. Until now, such tests have only been performed in moderate climates, and unfortunately, permits for these types of procedures have become more and more difficult to obtain. 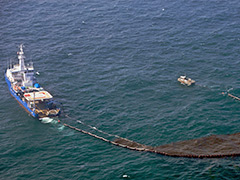 Another problem is that large portions of geographical mapping data for the Arctic remain incomplete, meaning that large vessels transporting oil have a tougher time navigating through dangerous waters in those regions, increasing the likelihood of spills. In addition to mapping, the council calls for an increased presence of coast guard, which would be able to facilitate quicker responses. Meanwhile, although the U.S. has an agreement with Russia to work together in the case of a spill, very little planning has taken place in regard to how such responses should be carried out.

Given that the Arctic harbors a good portion of the world’s undiscovered oil, and much of that area belongs to the U.S., the NRC’s long-term planning for more spills is essential to the environmental stability of the region.