For the first time, a scientific study has been able to quantify the man-made effect on melting glaciers, and the results are alarming. Since 1991, nearly 70% of glacier melt can be attributed to greenhouse gases caused by humans. 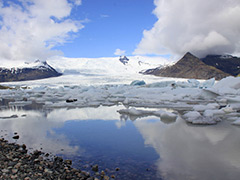 The scientists researched glacial melt dating back to 1851. Their observations showed that humans did not begin to affect glacial melt until about midway through the 20th century, when humans accounted for roughly 25% of melting glaciers. Not only have humans bore much more responsibility in the past couple of decades, but the overall rate of glacier melt has also rapidly increased. Each year during that time has seen 295 billion tons of ice melt as a result of human causes, as opposed to only 130 billion tons that have melted naturally.

Since the middle of the 19th century, an abundant number of glaciers have been melting. While scientists are unable to pinpoint the exact natural causes of the melt, the human reasons include soot, climate change (a result of burning oil, coal, and gas), and alterations in land use.

Although this study features an exceptional margin of error, the lowest possible percentage of melt caused by humans is still 45%, whereas the actual number could also be as high as 93%, a frightening prospect.

Glacier melt accounts for sea level rise in the amount of 4/10ths of an inch per decade, but melting ice sheets and water expansion due to higher temperatures also add to that figure. The areas of the world with glaciers that are more greatly affected by man-made greenhouse gases include Alaska and the Alps.