It’s common knowledge that humans have been contaminating the Earth for years with waste, pollution, and all around environmental irresponsibility. But what if we could contaminate other planets, the galaxy, or even the whole universe? 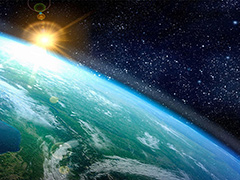 That’s exactly what NASA is concerned about, and the organization has begun to enhance its precautionary cleaning methods to ensure their spacecraft do not carry unwanted bacteria or microorganisms out into the vast regions of space. While the probability remains low that organisms could actually survive the turbulent trip into outer space, due to the extreme hot and cold temperatures of both takeoff and the expanse of space, respectively, experts say that a handful of certain types of organisms could withstand the conditions.

COSPAR, or the Committee on Space Research, has actually determined and enforced levels for how many of these types of organisms are acceptable onboard a spacecraft. NASA adheres to strict cleaning guidelines for the vessels, and often these cleaning methods are based around those employed to sanitize medical devices.

Experts say that the only real concern would be organisms that could potentially colonize an alien planet, moon, asteroid, etc., and therefore if the microorganisms in question are unable to reproduce, their habitation of an alien world would likely be of no consequence whatsoever.

With recent and upcoming missions to places like Mars and the moons of both Jupiter and Saturn, the issue of microorganism contamination has escalated because some areas set to be explored by Earth’s probes may potentially be hospitable to life, with temperatures above the freezing point, as well as the possible existence of frozen or liquid water. Should these conditions be present on Mars or any other planetary body explored by a spacecraft from Earth, the risk for contamination through colonization could be greater.

Given that the ramifications of environmental contamination here on Earth alone are potentially unquantifiable, the importance of interplanetary contamination prevention truly cannot be put into words.

Posted on May 19th under Pollution Reduction.
Permalink | Comments (0) | Technorati — View blog reactions | Save to del.icio.us