LEGO Should Be Commended For Cutting Ties With Shell

Last week, LEGO decided to take a stand against Big Oil when the company severed its long-standing ties with Shell. The two companies have partnered together since the 1960s, with LEGO featuring the Shell logo on many of its building blocks. Both companies also signed a recent contract (active since 2011) to partner together in ad campaigns. 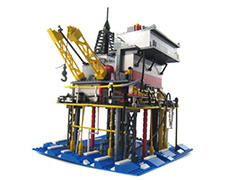 Recently, however, Greenpeace began urging the toy company to act in the interest of the environment and walk away from its relationship with Shell. A few weeks ago, Shell released new plans for drilling in the Arctic next year, at a time when the melting ice in the region will make drilling even easier for the company. The move comes after a series of mishaps plagued the company over the last couple years, including losing control of one of its drill ships in 2012 and the failure of its spill containment equipment in undersea trials that left it crushed and destroyed.


Greenpeace recognized that Shell’s plans to continue drilling in the Arctic reflect a complete disregard for the current state of the environment. Last month, the earth experienced its warmest September on record. Additionally, a seemingly never-ending drought rages in California, the Great Lakes remained frozen into the summer, and new data reveals coastal cities are drowning from rising sea levels at the fastest pace ever. Yet Shell continues to capitalize on the dire condition of the environment.

LEGO isn’t the only company to recently distance itself from Big Oil. Microsoft, Google, and Facebook all announced an impending end to their involvement with the American Legislative Exchange Council, a lobbyist group funded by Koch that manufactures anti-climate change legislation. Even the Rockefeller Foundation is backing away from its ties to fossil fuels.

These companies should be commended for realizing that the tired ways of the major oil companies are no longer sustainable. In its current state, the Earth’s climate balances shakily upon a precipice, while legions of scientists, activists, and eco-conscious citizens do everything in their power to pull it back onto safe ground. Meanwhile, companies like Shell are content to reach out and topple it from the edge. Their work should be repudiated.

Let us applaud LEGO for taking up the good fight against Big Oil.