Is a World Food Crisis Inevitable?

Although the budget normally set aside for food is commonly a small percentage of a person’s overall income, that convenient fact runs the risk of changing dramatically in the not-too-distant future. Over 47 million people in the United States alone require food assistance, and 800 million all over the world are hungry and starving. Experts predict that food prices are only going to climb in the coming years, therefore many are warning of an impending “food crisis.”

One of the most pressing concerns is the effect of climate change on crop harvests. Flooding, droughts, and temperature fluctuation have all contributed toward reducing the harvesting of go-to crops like rice and corn. With a population boom that will eventually result in an additional two billion people on earth, demand will rise for both these crops and the meat and dairy from livestock that consume them, the numbers just don’t add up, say the experts. 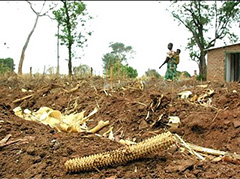 The theory behind the food crisis was put together by the Chicago Council on Global Affairs, which has also made some suggestions for combating the trend. One of those suggestions involves the breeding of crops that will be more durable and sustainable in changing climate conditions by surviving against droughts, floods, heat, freezing, etc. The council also wishes to jump-start areas in Africa and South Asia whose harvests are threatened by various factors like poor irrigation and a lack of advancements in farming. Agriculture in some areas has actually contributed to greenhouse gases, so the council has taken into consideration the use of proper tillage and fertilizers as a way to reduce this effect.

Another group, the U.S. Agency for International Development, has even expanded their program called “Feed the Future” to include an initiative that will attempt to guide the nutrition of mothers and young children in small nations struggling to meet harvest goals the way a large country like the U.S. can.

Although a food crisis may not be an absolute certainty, the conditions for one undoubtedly exist, and it is up to the human race to do everything in its power to prevent it.

Posted on May 28th under Global Ecology.
Permalink | Comments (0) | Technorati — View blog reactions | Save to del.icio.us