Hydrogen power has emerged as a possible energy solution for the future. Due to hydrogen’s abundance, recent years have seen the advent of hydrogen fuel cells as a proposed means of powering vehicles and power plants. Statistics show that the number of such fuel cells has risen exponentially in recent years, and will continue to do so over the course of the next decade. Coupled with oxygen, the simplest of all gases would initiate an electrochemical reaction to produce energy, with water and heat being the only resulting byproducts. 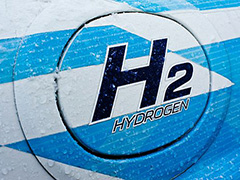 While the lack of emissions from the hydrogen fuel cell process is promising, costs are still high due to the difficulty in producing the hydrogen itself, which must be harvested through one of a number of relatively complex and costly ways, such as nuclear power or a process called “steam reforming.” Though there may be challenges, the completely clean nature of hydrogen has been encouraging for environmentalists, and costs are decreasing all the time.

Hydrogen fuel cell systems are already in use at Walmart. The company inked a deal with Plug Power that sent over 1700 forklifts using the system to Walmart stores. The forklifts actually benefit from hydrogen power, since battery power would result in decreased performance when the charge of the battery would die.

In addition to the forklifts, an entire power plant is run on fuel cell energy in South Korea, while Hyundai, Honda, and Toyota all have fuel cell versions of their automobile lines in development. A number of hydrogen power stations for cars and buses are already set to launch in California, even though the cost for each station sits in the $2 million dollar range.

Though the market potential of hydrogen fuel cells is still developing due to costs and technological challenges, the rate of energy efficiency is high, and some are predicting the industry to be worth tens of billions of the course of the next decade. Eco-conscious consumers will certainly appreciate the complete lack of greenhouse gases to be found in the process. The enduring dream of clean energy vehicles may still be at hand.