How does ocean wave energy conversion work? Sea wave energy is caught and then changed into the electrical type using a number of different devices and processes. One of the most widely used is the Pelamis Wave Energy Converter, and this ocean wave energy conversion method is very effective. The Pelamis Wave Energy Converter is the first device of this kind to be used commercially in a wave farm, and it has proven to be a leading contender with these devices. They can include buoys, mechanical devices with floating arms, and others. The basic idea is that the physical energy of the waves is converted into electricity, which can then be stored and used for power. The buoy or arms are normally floating on or under the water surface. As the wave device goes up and down with the wave motion, it causes a hydraulic pump to turn the generator, and this produces electricity. 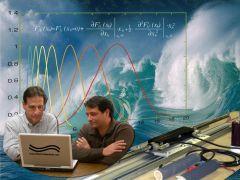 Other methods of ocean wave energy conversion may require a cable that runs along the floor of the ocean from the shore to where the sea wave energy devices are placed. This can limit the distance from the shore that they can be placed, and also limit the amount of energy that can be captured, converted, and transferred. Ocean wave energy conversion produces power which is clean and does not pollute in the same way that fossil fuels do, and it is both renewable and sustainable. The waves are continuous and do not stop, and they can never be depleted.

One Response to “How Does Ocean Wave Energy Conversion Work?”