Everyone already knows about the pending doom of the global water crisis, but where exactly will it take the biggest toll? Here are 5 regions of the world that will be the most affected by the global water stress: 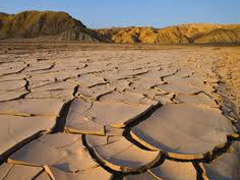 1) The Ogallala Aquifer, US
The biggest Aquifer in the United States is getting depleted rapidly. The Ogallala Aquifer, which stretches from South Dakota down to Texas, is losing 12 billion BCM (cubic meters) every year. The total amount the aquifer has already lost is equivalent 18 Colorado Rivers. Many High Plains farmers have already begun to stop using irrigated agriculture, because they realized that there won’t be an endless supply of water to rely on.


2) Mexico City
There is so much water getting pumped from underneath Mexico’s City’s foundation, that the city is actually sinking. Once there was a lush land of lakes in its place, but now all the lakes are gone because of pumping and the forest around the city has been chopped down. There is an even bigger problem of not having an adequate drainage system, so what happens is that rainwater gets mixed with sewage, and this mixture is then used for irrigation. Another problem is leaking pipes, which lose an average of 40 percent of the water in the city. There is now a big risk for the city to run out of fresh water altogether.

3) Catalonia, Spain
Chronic water shortages are already happening in this Spanish province, with 4.5 million people already affected. Many of Europe’s cities are using the groundwater from Catalonia at rates that are unsustainable, and this is a big part of the global water crisis.

4) The Nile – Egypt, Sudan, and Ethiopia
Another serious consequence of the global water stress could be suffered in the Nile. As predicted by the United Nations, the biggest cause of war and conflict in Africa will be access to water within the next 25 years. These are most likely to happen in countries which share a water source like a lake or a river. There is already considerable national competition and conflict going on in the Nile River basin, which runs through Egypt, Sudan, and Ethiopia. If these countries’ populations keep growing, there could be severe conflict in the future.

5) Southern Australia
Already the driest continent in the world, Australia will undoubtedly suffer from the global water crisis. One big problem is that clean river waters, such as those of the Snowy River, the Darling, and the Murray, are having water tables rise under their surface. This causes salt to be pushed up to the surface in dangerous quantities. Some of Australia’s most productive farmland has already been destroyed by salt, and the situation is only projected to get worse.