The impact of global warming continues to be widespread and unpredictable. Information from a new study shows that one of the world’s biggest farming cultures, Indonesia, has suffered immensely due to changing conditions of global warming, resulting in the migration of many of its farmers. As the fourth largest nation and a country in which most of its residents are farmers, experts are looking to Indonesia as a potential model of what may need to take place in other cultures once changing environmental conditions strike. Temperatures in the country are projected to rise up to 4.5 degrees Fahrenheit during the 21st century 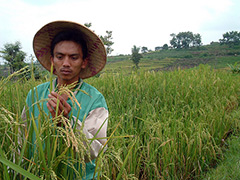 Over 7,000 households in Indonesia were tracked in the study, revealing that a significant number of people were affected financially due to the changes in temperature, spurring migration to cooler areas. While temperature is a determining factor for Indonesians, experts predict that shifts in the global landscape and environment will also instigate large migrations in the coming years. Islands are getting smaller, deserts larger, and natural events like hurricanes, volcanoes, and monsoons are becoming more unpredictable.

As extreme conditions begin to affect all of the corners of the world, including a severe drought in California and the worst heat on record in Australia, migration may be on the rise for people who rely on the environment for their livelihood in places like these. With economic conditions also at an all-time low, many farmers may balk at the costs necessary to employ localized solutions, and in the end the simplest, cheapest solution may be to migrate. Time will tell, but the cornbelt in the United States is sure to be faced with many of these same issues in the coming years.