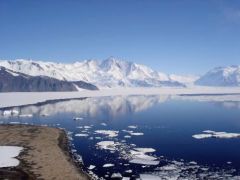 The global warming effects on Antarctica do not just involve the ice shelves and sea levels. The main area of Antarctica, which is more than ninety five percent, has not shown increased temperatures, but this is due in part to the fact that the land stays colder than the ice shelves, so small temperature changes of a few degrees will not have as big of an impact on these other areas. The glaciers and ice shelves are more sensitive though, and the result can be a complete change of habitat in these areas. Some species which require cooler temperatures may not be able to thrive and survive, and could either move to a different area where the global warming effects on Antarctica are less drastic or the species may die out and become extinct. In 2002 the Larsen B ice shelf broke apart, due to warming temperatures, and the process did not take long at all. In a contrast between photographs of this ice shelf taken only months apart the difference is drastic, and can be seen very clearly and conclusively.

Increasing temperatures have already shown some results. The Adelie Penguin species in the area have seen smaller numbers, and some areas used for nesting in Antarctica have been abandoned and are no longer used. Other penguin types are moving in, and taking over where the Adelie penguins can no longer thrive. This includes Chinstrap penguins and Gentoo penguins. The krill are another species which is seeing smaller populations in the area, and this has also led to smaller numbers of Adelie penguins, because krill are the main food source for these birds. These ocean inhabitants live under the ice, and the Antarctica Peninsula is where large numbers are located. The increasing temperatures may be causing krill to move to other areas or die off, and there is only one fifth of the population of krill today that there was thirty years ago. Most of the local marine and animal life depend on the krill, and the visitors and fisheries in the area depend on the marine and animal life. One small shift in this balance can have massive effects and consequences for every inhabitant of this ecosystem. The global warming effects on Antarctica are happening right now, and this activity must be slowed down and steps taken to protect this area, and the rest of the world.