Game-Changing Climate Decisions: 2013 May be the Year

As we exit one of the deepest and darkest times for the economy, we are seeing glimmers of hope around the world. While slow to grow, the economic outlook is beginning to improve as we experience an expanse of the middle class at nearing one hundred million per year and Asia as well as Africa are experiencing an improved quality of life. The expansion will also bring an elevation of importance to the topic of climate change, as world leaders gather to discuss and 2013 may yet be the year of focus on our planet. 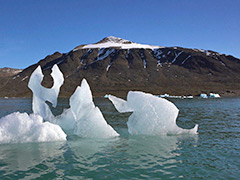 The World Economic Forum is planned in Davos in 2013 and at last, climate change is ranking in the top three of over 1,000 leaders of industry, government, civil society and academia that were surveyed. President Obama has reinforced this message as he has listed climate change as the top administrative priority.

The world has good reason to finally begin focusing on climate change, as there have been extreme weather events around the world, breaking records an unprecedented rates. The U.S. experienced the hottest year on record in 2012, with a combination of wildfires, droughts and increasing sea levels. The drought alone is expected to reduce the U.S. GDP by around 1% and is currently listed as the highest priced natural disaster in the history of the U.S. (so far). Hurricane Sandy reduced the GDP by another 0.5%. New studies have resulted in information indicating that climate change is costing around $1.2 trillion per year on a global scale or 1.5% of the global GDP.

There is a need to shift from the high carbon emissions energy to sustainable and renewable energy and this is a critical step to have any impact on climate change. However, with that said, there are many that seem to want to change to simply low-carbon energy and this may be the wrong direction. The low-carbon energy choices typically include shale gas, which has increased almost tenfold since 2005 in India, China, Argentina and other shale rich nations. The lower carbon emission energies may be a step in a better direction, but cannot be a base for reducing the carbon growth path. Greenhouse gas emissions from all of the industrial countries absolutely need to be reduced by eighty to ninety percent by the year 2050 to prevent accelerated climate change effects and choosing lower carbon emission energies will not get us to that goal.

When it comes to the topic of renewable energy, especially wind and solar power, this is on the top of the charts for the best choices, but there doesn’t seem to be the overall support on a local or world-wide scale. The prices and costs for both solar and wind energy have been dramatically reduced but investors are still a bit skiddish to finance the ventures. This mindset must be changed if we are to achieve our lowered global emissions goals and the World Economic Forum is the most important place in the world this year.

4 Responses to “Game-Changing Climate Decisions: 2013 May be the Year”