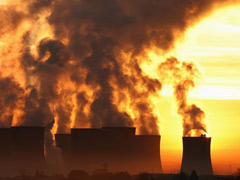 However, in the more recent years there has been much criticism of the widespread world fossil fuel consumption. As we hear the word “green” more and more, people all across the globe are starting to understand how important it is to replace harmful fossil fuels with energy sources that are clean and renewable. Of course, there is still a fair share of people who don’t believe in global warming and the harmful effects of fossil fuel consumption, but obvious environmental changes and scientific evidence are making a lot of governments take it more seriously.

The country that is currently leading the world in using renewable energy sources is Iceland, which is just a small island in the middle of the Atlantic. They have embraced the use of hydropower and geothermal energy fully, with about 82 percent of their energy consumption delivered from sources that are renewable. Iceland has done an amazing job at weaning itself off the dependence on harmful fuel consumption and replacing it with sustainable renewable energy sources. Sweden is another good example, although not nearly as great as Iceland, with about 25 percent of its energy needs coming from renewable sources.

Unfortunately, in the United States it’s a different story. Giant oil companies have fiercely opposed the green movement over the recent years, because they know their profits are at stake. However, many Americans understand the reality of the global warming threat and are starting to look into sources of alternative energy. Wind power has become one of the fastest growing markets in the U.S., with various new manufacturing plants for wind turbines opening in the recent years. Also, the U.S. government has instituted rebates, tax credits, and other programs, which encourage its citizens to buy energy saving vehicles, appliances, etc. New businesses and homes in the U.S. are built with products that are considered environmentally friendly, as well as using renewable energy sources wherever possible. Owners also receive substantial tax breaks for using technologies considered “green”. So, there is definitely hope for the United States!