While the interest of the U.S. population continues to increase in reducing global pollution levels, the Environmental Protection Agency (EPA) seems to be turning a blind eye to some of the heaviest polluters in our country. This lack of interest in enforcing pollution control guidelines may be due to an overwhelming challenge or just plain old political interest. Either way, the rest of us lose out. 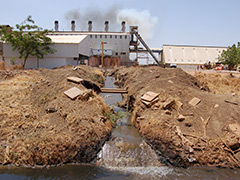 As Americans, we are recycling, installing renewable energy sources and investing time and interest in every possible way to adjust to and reduce our carbon footprint. However, it might be noted that ships, aircraft and non-road engines and vehicles in the U.S. carry the weight of responsibility of twenty four percent of the mobile source greenhouse gas emissions in the U.S. This equates to emissions of around 290,000 tons of soot each year. If nothing is done, these sources are anticipated to have rapid growth in the next decades.

The EPA made announcements that they will not be taking action against these major mobile sources and don’t plan on instituting any pollution control guidelines to regulate non-road engines and ships. It has also included a delay in any regulations on aircraft.

Under the ‘Clean Air Act’, the U.S. government is required to enforce the reduction of pollution to ensure the protection of public health and the environment. It is unknown why the Obama administration has not followed through in enforcing the Clean Air Act when it comes to greenhouse emissions from airplanes, ships and non-road engines. The technology is available now, in very cost-effective methods. Due to this fact, there is a lawsuit at issue that has been filed in federal court in the District of Columbia by Earthjustice and the Western Environmental Law Center on behalf of Oceana, the Center for Biological Diversity, Friends of the Earth, the International Center for Technology Assessment and the Center for Food Safety.