The Eliica electric car is one of the strangest eco cars to be unveiled so far, and there are still some obstacles which prevent this vehicle from being sold to the public. The Eliica electric car is still just a prototype, and the cost of around four hundred thousand dollars means that it will be a while before the Eliica hits the consumer markets. Unlike the byd electric car and all electric car conversions, the Elliica has eight wheels instead of four. Each wheel has an individual motor that turns it. The design of the vehicle is unusual as well, with four doors and an odd shape. It was created by Japanese designer Hiroshi Shimizu, and a big portion of the expense of the vehicle comes from the high cost of the lithium ion batteries which are used. 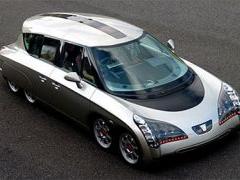 You will not be able to purchase one anytime soon, and even when these cars do finally hit the market they will have a cost that will probably be much more than a byd electric car or the electric car conversions that can be performed. The car does have a strange and unusual look though, one that is sure to draw attention anywhere the vehicle is driven. Four seconds is all it takes for this vehicle to go from zero all the way up to sixty miles an hour, so power is not really a problem like it is with some other electric models. The Eliica is a strange automobile, but it is one that may never be sold to consumers unless the problems can be worked out.