“De-Extinction”: Could Extinct Species Once Again Walk The Earth?

Although the revival of dinosaurs, as portrayed by the blockbuster film Jurassic Park can still be considered distinctly fantasy, a large group of scientists from various disciplines in biology convened in Washington, D.C. earlier this year, agreeing that “de-extinction” (the process of bringing extinct species of animals back into existence) may soon be possible. Advances in the fields of DNA recovery, stem cell research, and the reconstruction of genomes have convinced current-day scientists that de-extinction may arrive sooner than expected, and in fact, several current projects are already beginning to prove them correct. 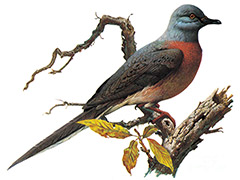 Scientists behind de-extinction intend to revive species that were wiped out as a result of human intervention. In 2003, an extinct species of wild goat called the bucardo, which was quickly depleted by hunters in the 1980s and 90s, was briefly brought back to life by a team of Spanish and French scientists who had hoped to see the goat re-populate its native Pyrenees mountain range. The team used the nuclei of cells from the last living bucardo, injecting them into goat eggs “emptied of their own DNA,” then implanted these eggs into living goats.

Although the clone only survived a few minutes, the project served as a precursor to the current de-extinction movement, giving scientists reason to believe that other extinct candidates like the dodo, the great auk, and the thylacine, could be next. Researchers in Seoul have even taken the first steps toward attempting to clone a woolly mammoth from intact nuclei frozen in tissue found last year along the Yana River.

One of the main catalysts for de-extinction is the passenger pigeon. Two centuries ago, the birds were so plentiful that they enveloped the entire sky, but by 1914, they were gone. Iconoclast environmentalist Stewart Brand and his wife, Ryan Phelan, founder of DNA Direct, recently set into motion a project to revive the birds. Operating under the guise of Brand’s foundation, Long Now, their “Revive & Restore” aims to coordinate biologists who have made advancements in genomic conservation. Brand and Phelan have teamed with Harvard researcher George Church, who created a technique by which he can manufacture genes for the passenger pigeon and “splice them into the genome of a stem cell from a common rock pigeon.” (Zimmer)

Another group of biologists in Australia, lead by Michael Archer, are well underway with their “Lazarus Project,” which involves the revival of the gastric brooding frog, a unique amphibian that would reproduce by swallowing its fertilized eggs and regurgitating them later. Despite its extinct status, which was supposedly caused by a disease that originated from a fungus spread by humans, Archer’s team has produced embryos of the frog using somatic cell nuclear transplantation, a method similar to the one used on the bucardo.

With this many projects far along in their development, and advancements in genomic and DNA technologies taking place rapidly, it appears more and more likely that extinct species will once again walk the earth.