Dam Floodwaters: How Beavers Can Save Us

As the masses become more and more informed thanks to the Internet as well as expanded news cycles, the term ‘global warming’ has become increasingly recognized as a misnomer. Why? Because the world isn’t necessarily getting warmer. Although we’ve experienced floods and wildfires due to some of the hottest years on record, we’ve also experienced some of the coldest cold snaps in memory—hence the more appropriate term ‘climate change.’ 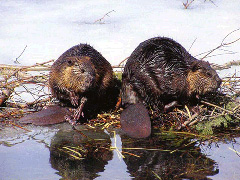 Therefore, it’s safe to say that we are feeling the effects of climate change, and that includes harsh weather extremes on both sides of the spectrum. So, even though a large portion of the globe is currently bundling up to cope with deep freezes, we can expect comparatively sweltering temperatures by the time summer rolls around. This means more rain, and more flooding—of crops, homes, businesses and cityscapes where the water has nowhere to flow and evaporate.

That said, some have turned to a previously demonized rodent for salvation from these impending floods. That’s right. Beavers, and their intrinsic propensity for dam-building, may just be the answer to preventing irreparable flood damage.

Why were beavers so scorned in the past? Because these bushy-tailed creatures often build dams wherever they damn well please whether it’s in the middle of a road or in someone’s backyard. The dams would re-route water and actually cause small floods.

But, as British businesswoman, environmentalist and writer Louise Ramsay puts it in her recent article in The Ecologist, “The point is that, by creating multiple small floods, ponds, pools and wetlands upstream, they [beavers] can help to mitigate bigger floods downstream.And small floods made by beavers in inconvenient places can be reduced or drained in various ways. Dams can be removed or modified. Whereas large floods cannot be so easily dealt with and may cause widespread problems.Along with floodwaters goes sediment, and this becomes a serious pollutant once it reaches the cities and the sea, clogging drains and damaging marine life.Beaver dams hold back sediment to a hugely significant extent, as shown by studies done in Texas and Belgium. The two species, Eurasian and North American are shown to have much the same impact.”

To conclude, I’d like to borrow and rework an old adage: If you let them come, they will build it.