It seems that the coal companies don’t want their dirty little secrets known and have taken it upon themselves to remove any info that isn’t sending a positive message of support. Or so it seems at the University of Wyoming, where the pressure of the coal companies, with the assistance of the legislature in Wyoming, required that they remove an outdoor art piece at the University campus. 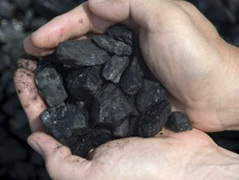 The artistic sculpture in question was entitled: ‘Carbon sink: What goes around comes around”. The design was by Chris Drury, a British artist, in 2011 and depicts a well planned spiral shape, which are the logs of the trees killed by an infestation of pine-beetles. The center of this thirty six foot diameter spiral sculpture focuses on coal-blackened logs which are surrounded by a varied selection of lumps of coal. Apparently, the big coal companies felt that the artwork was offensive and took measures to ensure that their voice was heard in Wyoming legislation.

An anonymous donor and the Wyoming Cultural Trust paid $45,000 for the artwork. While the purpose of the sculpture was not meant as a political statement, it was created in the hopes that it would prompt those that viewed it to have conversations about the important topic of climate change. Scientists have indicated that climate change has caused a pine beetle infestation which has destroyed over three million acres of the lodgepole pine forest area in Wyoming.

The initial response of negativity from the coal companies was due to the fact that the University received a lot of funding from the very companies that the sculpture was putting down. Some of the elected officials also have roots from some of the largest coal areas in the country, and many have gone on a man-hunt to see what the University knew about the plan for the sculpture.