China has made a power play in the world of environmentalism with the approval of the Phoenix Towers in the city of Wuhan. Once completed, the two massive skyscrapers will stand as the tallest and greenest structures in the world, cementing China’s seriousness in environmental endeavors. 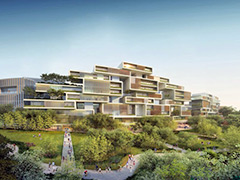 Built with the intent of conveying the dual Yin/Yang dynamic of Chinese culture, the towers will be over 3,200 feet tall and will use sustainable, natural means of producing energy. Construction plans call for one of the towers to feature a huge central shaft that will function as a kind of natural chimney that gathers air, cooling the whole structure and operating a turbine. That tower, called the Feng, will also employ enough solar panels to power both of the structures, while its sister building, the Huang, will house indigenous species and air-cleaning foliage.

Despite its many problems with pollution, which the Phoenix Towers are partially meant to counteract, China has long desired to enter the fray of eco-conscious territories. Previous wide-scale environmentalist projects have unfortunately failed to pan out in the country, including plans to construct an eco-city near the city of Ordos, the barren remnants of which still exist today.

The Phoenix Towers comprise only one of several projects happening at Wuhan, as an eco-park and a large-scale, environmentally-friendly office building are also in the works. China has announced it is working cooperatively with the French government to ensure Wuhan’s carbon footprint is kept extraordinarily low. China even dubbed Wuhan an environmental “Super-City,” and amazingly, the country has revealed plans to relocate over 260 million residents into cities like Wuhan over the next several years.