It may be strange, and rather counterintuitive, to think that mankind’s industrial air pollution actually beat mankind to certain remote regions of the Earth—that the advances of innovation, revolution and the subsequent “carbon footprint,” in reality, preceded any homosapien footprints. 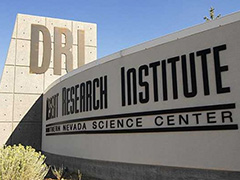 But that happens to be the case when it comes to the inhospitable frozen wasteland that is Antarctica according to a new study conducted by an international team of scientists led by Joe McConnell of Reno, Nevada's Desert Research Institute (DRI). Indeed, Norwegian pioneer Roald Amundsen became the first man to set foot on the shores of the South Pole in late 1911, but traces of lead pollution actually made it to the southernmost continent two decades earlier thanks to a myriad of industrial activities including early mining, smelting, and burning of fossil fuels in areas of Australia.

Using data from 16 ice cores collected from widely spaced locations around Antarctica, including the South Pole itself, the DRI team created the most accurate and precise reconstruction of lead pollution on the Earth’s southern region to date. The new record, described in an article published in the online edition of the Nature journal Scientific Reports, spans a 410-year period from 1600 to 2010 A.D.

According to another recent article by ClickGreen Staff and Environmental New Network, “All measurements of lead and other chemicals used in this study were made using DRI's unique continuous ice core analytical system. Low background atmospheric concentrations, together with well-known and often distinct isotopic characteristics of industrial sources make lead an ideal tracer of industrial pollution.”

"Lead is a toxic heavy metal with strong potential to harm ecosystems," said co-author Paul Vallelonga of the University of Copenhagen. "While concentrations measured in Antarctic ice cores are very low, the records show that atmospheric concentrations and deposition rates increased approximately six-fold in the late 1880's, coincident with the start of mining at Broken Hill in southern Australia and smelting at nearby Port Pirie."

"It is very clear that industrial lead contamination was pervasive throughout Antarctica by the late 19th century, more than two decades before the first explorers made it to the South Pole," he added. "The idea that Amundsen and Scott were traveling over snow that clearly was contaminated by lead from smelting and mining in Australia, and that lead pollution at that time was nearly as high as any time ever since, is surprising to say the least."

McConnell’s team is fairly certain that Broken Hill in southern Australia is singlehandedly responsible for introducing lead pollution to Antarctica before humans set foot on its land. The study authors add that it remains a significant source of lead pollution to this day.