But Size Doesn’t Matter: How we’re Shrinking in the Heat

The University of Michigan, the University of New Hampshire, Colorado College and the California Institute of Technology have combined their scientific powers to shed new light on how global climate change will affect mammalian body size. Paleontologist and Professor of Earth and Environmental Sciences Philip Gingerich led the study. He and his colleagues shared their findings on November 1, 2013 in L.A. at the annual meeting of the Society of Vertebrate Paleontology. 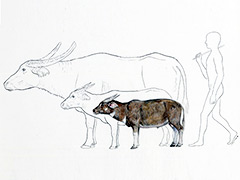 For years, scientists have known about a warming period known as the Paleocene-Eocene Thermal Maximum (PETM). It was an extreme and arguably natural global warming event (called a hyperthermal) that occurred 55 million years ago, lasted about 160,000 years and caused the size of large animals like primates, horses and deer to shrink significantly.

Gingerich and his team, however, have discovered evidence of a separate and less extreme hyperthermal event occurring 2 million years after the PETM. They’ve dubbed this period ETM2 (Eocene Thermal Maximum 2), and increased global temperature approximately 5 degrees Fahrenheit whereas the PETM peaked at a 14-degree increase. What’s important about ETM2 is that it suggests a pattern—not only of global warming but of subsequent mammalian “dwarfing.”

"The fact that it happened twice significantly increases our confidence that we're seeing cause and effect,” said Gingerich, “that one interesting response to global warming in the past was a substantial decrease in body size in mammalian species.”

The team of universities concluded that smaller body size "seems to be a common evolutionary response" by mammals to extreme global warming events, "and thus may be a predictable natural response for some lineages to future global warming."

Seems logical. But, the scary part is that we’ve made quite a dent in global climate change ourselves. How bad could it get, and just how small do we have to get, when the natural patterns of the Earth just happen to coincide with the fruits of our collective carbon footprint?