The legends of the visionary beauty of the Hanging Gardens of Babylon have been taken to heart as cities around the world begin instituting rooftop garden projects. As with many things in the history of our ancestors, they actually may have been a method to their madness, that goes beyond the esthetics and enters into the useful and purposeful. The city of Beirut has taken a lesson from history and is in the process of changing Lebanon into a city filled with rooftop gardens and the reduction of carbon dioxide in their air. 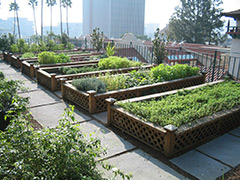 What do you do when your city has a serious shortage of green space? You take action such as the ambitious plans to turn Beirut’s intense amount of currently massive amount of unused highrise rooftops into gardens filled with trees and even food producing areas. Examining the over 15,000 rooftops that are suitable for this project (approximately 80% of the rooftops) could equate to one tree, per rooftop equals the same amount of trees that currently exist in Central Park in New York. The presence of the trees will put a sizable reduction in the city’s carbon dioxide emissions, as the trees act as natural filters as well as giving off oxygen. As a rooftop canopy, the trees will act as a natural cooling process.

The project will not involve a major overhaul in the drainage system nor is it a huge engineering situation. Estimated to cost around $3.5 to $4 million, the Wonder Forest Project is being imagined to turn Beiruit into the first rooftop garden city in the world. Additional portions of the plan include planting, harvesting and selling such profitable products of the trees as citrus and olives. This produce thrives incredibly well in the Mediterranean climate of Beirut and could be a part of the project that could pay for the project itself.

Posted on May 24th under Global Ecology.
Permalink | Comments (0) | Technorati — View blog reactions | Save to del.icio.us