New ventures into algaculture are finding more incredible benefits beyond the production of biodiesel fuel. While this is another excellent alternative energy, there are some excellent positive effects for both us and Mother Earth. 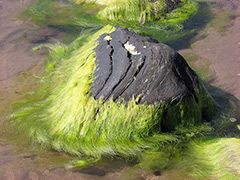 The benefits of algae farming or algaculture, as it is now called, are endless. The main one is that algae can be used as biodiesel fuel source and help decrease or even eliminate our dependence on foreign oil and harmful fossil fuels. Algae in general grows much faster than land crops, so is more efficient for making biodiesel. An acre of algae has the potential to produce 5,000-20,000 gallons of oil, which can, in turn, be converted to biodiesel. It is possible to process raw algae in order to make biocrude, which is petroleum’s renewable equivalent. It is also possible to refine it in order to make jet fuel, diesel, gasoline, and chemical feedstocks for drugs and plastics. Oil refineries can also be used to process it, so anything that is made from crude oil can be made from it as well.

Another one of the important benefits of algaculture is that algae releases oxygen and uses carbon dioxide, like other plant life. So, this means that algaculture that is large-scale would not only create environmentally friendly biofuels, but also that while the algae grows, it would release fresh oxygen and absorb carbon dioxide, thus cleaning the air. Generally about 77 percent of the whole mass of algae may be used in animal feeds, with 13 percent used for oil converted into biodiesel, and the 10 percent that remains used in food supplements as fatty acids.

The theoretical benefits of algae farming are clear. It can grow in open ponds or in sealed clear tubes. It has the potential to produce a lot more oil than soybeans (per acre), which is also a source of oil for biodiesel. It is also possible for algae to clean up waste by processing carbon dioxide from plants and nitrogen from wastewater. Another one of the great benefits of algaculture is that algae can be grown on marginal lands, which is unsuitable for regular crops, salt aquifers can be used as its sources of water, which cannot be used for agriculture or drinking.

Three things are necessary to grow algae: sunlight, carbon dioxide, and water. Algae, like other plant life, goes through a process called photosynthesis, converting the sun’s energy into chemical energy. This resulting energy is used for chemical reactions like sugar formation or converting nitrogen into amino acids. Of course, algal oil is used to produce biodiesel, which, if done on a large-scale basis, has the potential to completely replace gasoline. However, the technology is not nearly advanced enough yet, and algaculture is still at a minimal level. It is developing quickly though, and will be doing so in the upcoming years, since there is a need like never before for renewable energy sources.