These days, renewable energy can come from just about anywhere a creative mind can think up, and a new company called Altaeros Energies has most certainly thought up. The MIT-based outfit created an airborne wind turbine designed to float 1,000 feet in the air, taking advantage of the frequent, powerful wind that occurs at such altitudes. 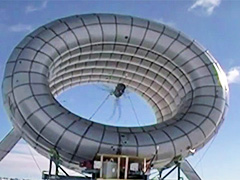 Referred to as the Buoyant Airborne Turbine, or BAT, the device can be transported and deployed without having to use cranes, towers, or other foundations, according to CEO of Altaeros Energies, Ben Glass. He says his BAT is ready-made for small, isolated towns that have little resources or access to electricity.


Glass claims that remote portions of Alaska are the ideal location for the BAT, because the diesel generators currently in place there produce energy at high costs of up to one dollar every kilowatt-hour. By comparison, Glass insists that the BAT device yields electricity at only 18 cents per equal duration, a fraction of the cost of current estimates.

The Institute of Electrical and Electronics Engineers, a conglomerate of electrical expert scientists committed to the keen use of technology for the betterment of humanity, perceives plenty of value in the BAT. While the rate of electrical costs achieved by the BAT are still too expensive for the average consumer, the IEEE points out that the device would be perfect for places like military bases, mines, disaster zones, and other “off-the-grid” locations where access to consistent electricity presents a challenge. Another benefit of the BAT is that, thanks to its airborne nature, it possesses the ability to lift communications equipment into the sky, such as meteorological or sensing equipment; in other words, just the types of devices that might be necessary at the aforementioned locations.

Although the BAT is still in the experimental stages, it has been tested in heavy winds and is currently poised to break the world record for highest altitude wind turbine. Will the BAT be a high-flying success or just a Spruce Goose? Only time and the wild blue yonder will tell.