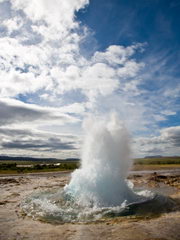 1. Cost Of The Energy

One advantage of renewable geothermal energy is the cost factor. There is an initial cost to build geothermal energy facilities, and this cost is not cheap. But it is comparable to the costs of building other types of power plant facilities, including coal powered plants and nuclear power plants. Geothermal power generation holds an advantage though in the fact that once the cost of the plant has been recouped, the energy from that point forward has very little cost involved. There will be small maintenance and operation costs, but the energy is as close as possible to free energy possible.

Geothermal energy is renewable, unlike fossil fuels which are being depleted much faster than previously thought. This energy comes from the heat inside the earth, and is a naturally renewing energy source that will never run out. The earth has a molten core, and this can provide heat forever. There is no chance of an energy crisis when fossil fuels such as coal and oil run out if geothermal power generation programs are started now and become widely used. There is no need to expend energy to generate heat, the inside of the earth already does this. Instead the focus is on capturing this heat and using it to meet global energy needs. Unlike mining, which destroys the earth and the environment, geothermal plants do not remove large amounts of earth or use poisons to leach chemicals and substances out of the soil.

3. Does Not Change The Landscape

Renewable geothermal energy facilities are very aesthetic and pleasing to the eye, and these facilities do not mar the landscape or natural environment the way oil rigs and other fossil fuel recovery efforts can. Geothermal plants will blend in with the natural surroundings, and they can be situated on the oceans and other bodies of water as well. This means less land used for these energy plants, so more can be used for housing and food crops. Building geothermal power generation plants in the ocean maximizes land use and allows many more plants to be erected. This can help meet the global energy needs of the future without causing hunger or overcrowding.

Renewable geothermal energy is very friendly to the environment, because it does not damage the earth or pollute the air and environment. Many power plants that utilize fossil fuels have high amounts of carbon emissions, as well as other greenhouse gases, and they add significantly to the level of air pollution. Geothermal energy plants cause none of this, and this energy generation method is extremely clean and green. Switching from harmful fossil fuels to geothermal energy generation can stop the global warming increase that has been seen lately, and substantially lower the air pollution levels all over the world.