3 Everyday Things You Never Knew Were So Polluting

The idea behind solar panels is a good one, and once they are built, they do help produce clean energy and reduce greenhouse gas emissions. The problem arises when it comes to actually building them. It causes more pollution and more greenhouse gas emissions to build solar panels than they will actually save during their existence. In order to construct one solar panel (let’s say the size of 1 square meter), 40kg of coal must be burned by a factory. This may not sound like much, but by burning that amount of coal, even the least efficient power plant can generate 130 kilowatt-hours of electricity. This is equivalent to keeping an LED light bulb on for 30 years, 12 hours a day. But the solar panel built with that amount of coal can only last 20 years. So, the big question is, would it even be worth it? 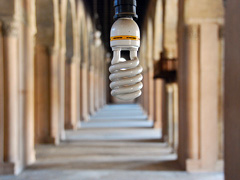 In our unstable times, when almost everything we do as humans is said to cause pollution, there are some things that some of us still try to do in order lead an environmentally-friendly lifestyle. Unfortunately, this becomes more and more difficult, as we learn about more and more things that pollute our environment. Here are three of these things, some of which were initially intended to help the environment!

This is the first on our list of things that cause pollution, and a very surprising one indeed. They do help save energy, but at the same time they pose a threat to the environment because what is inside them is considered poisonous. The way these fluorescent bulbs work is they heat gases inside a glass tube. Among these gases is mercury, which is a neurotoxin that is very dangerous. It may cause brain and kidney damage in humans. The amount of this chemical is extremely small (only about 5 mg), but it is enough to make 6,000 gallons of water unsafe to drink if it were to be dissolved in it. Even the new ‘low-mercury’ bulbs are said to be able to make as much as 1,000 gallons of water unsafe to drink.


Next on our list of things that cause pollution are these simple farm animals that are ubiquitous around the countryside. The problem with cows is that because of their belching, a huge amount of methane is released into the atmosphere. This is a toxic greenhouse gas, and it is a big one among the things that pollute. According to statistics, one cow can emit as much as 53 gallons (200 liters) of methane per day. This daily amount is roughly the same as what is produced by an average vehicle! The reason cows produce so much pollution is because they have four stomachs, all of which are used for food digestion. They do not use intestines like humans. The cows’ stomachs are, therefore, full of bacteria, which serves to help their digestion. It is precisely this bacteria that produces methane.

Posted on May 25th under Pollution Reduction.
Permalink | Comments (0) | Technorati — View blog reactions | Save to del.icio.us